In the 2012 election cycle, 72 percent of partisan federal and state election contributions from family members serving on the board of the Walton Family Foundation supported Republican candidates and committees. Four years later, in the 2016 election, the same family members gave over 60 percent of their partisan federal and state contributions to Democratic candidates and committees. Should we expect a more lasting change in the political alignments of one of America’s most influential philanthropic families?

According to Forbes, the Waltons are America’s richest family, with a combined net worth of $130 billion dollars. While America’s second richest family—the Kochs—have attracted considerable scholarly and media attention to their political funding efforts, including a detailed investigation in Jane Mayer’s Dark Money, the Waltons have not drawn quite the same level of scrutiny for their political contributing. Rather, the focus on the Waltons has largely centered on their philanthropy. The Waltons’ private foundation, the Walton Family Foundation, is a major donor to school choice initiatives and charter schools, as well as environmental conservation. Yet the family stands apart from other American philanthropic families in some respects; for example, no members of the Walton family have signed the Giving Pledge.

Like some of their billionaire counterparts, the Walton family has had a long relationship with Republican Party politics, with considerable financial rewards for Republican politicians running for office. For instance, in the 2004 election, Alice Walton (the richest woman in the world, with a net worth of $44 billion), contributed $2.6 million to Progress for America, a 527 committee organized to support George W. Bush’s re-election. The Waltons’ support of Republicans has seemed unwavering: Alice contributed to every campaign of Republican Greg Abbott – the previous Attorney General and now Governor of Texas – since 2002, spending $350,000 for his gubernatorial campaign in 2014 alone (making her the 10th largest individual donor to that campaign). Alice is not alone. Her brother Jim Carr Walton has been one of the top donors to the National Republican Senatorial Committee, which seeks to elect Republicans to the Senate. He shares this distinction with such big-name Republican donors as Charles and David Koch and Robert Mercer.

It seems, however, that this powerhouse donor family may be shifting its political support in recent years. There were reports during the 2016 election that the family was backing Democratic presidential nominee Hillary Clinton. Additionally, with Millennial and Gen X nephews and nieces, there is reason to believe that the younger generation may be less conservative.

In order to explore whether there has been a shift in Walton family political giving, we gathered campaign finance data from federal and state elections from the Center for Responsive Politics and the National Institute on Money in State Politics. Because there are many Waltons, we focused on the five members of the family who currently serve on the Walton Family Foundation’s board of directors – Carrie Walton Penner, Alice Walton, James Walton, Lukas Walton, and Rob Walton. We also included Jim Carr Walton, one of the largest donors in the family, a direct Walmart heir, and former member of the foundation’s board. We divided the six family members into two generational groups: Alice, Rob, and Jim are the still-living children of Walmart founder Sam Walton and were therefore considered the “older generation.” Lukas, James, and Carrie are Sam Walton’s grandchildren, and are in their thirties and forties, so we categorized them as the “younger generation.”

The figures below provide some basic totals broken down by generation and recipients’ partisanship for the years leading up to the 2016 election and afterward. “Recipients” are both candidates and PACs or 527s (but not ballot issue committees). Where committees clearly supported candidates of one party or another, we coded them as partisan recipients, and otherwise coded them as non-partisan. All amounts are adjusted 2018 dollars. The top figure illustrates that from 2000 to 2015, the Walton family, particularly the older generation, primarily funded Republicans. However, starting in 2016, the older generation was much more likely to fund Democrats than before. When the younger generation’s donations are included, the Waltons were giving almost as much to Democrats as to Republicans from 2016 to 2018. 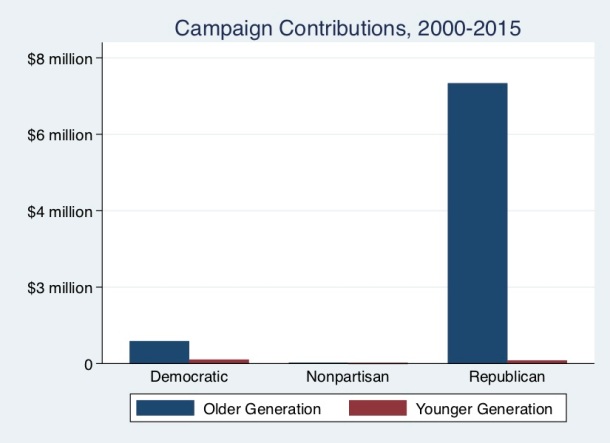 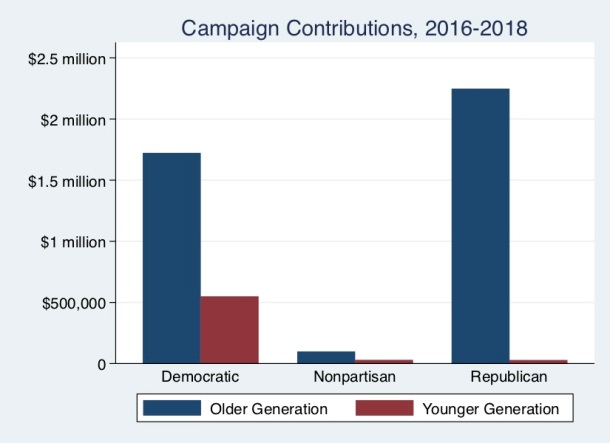 But was this a temporary shift spurred by Trump? Or was this a trend starting beforehand that may endure? The figure below displays the share of yearly Walton family state and federal contribution dollars going to recipients of either party from 2000 to 2018. (Note that while the 2018 contribution data is almost complete, a handful – 8 states, to be clear – are not complete at the time of this writing, according to Follow the Money). The figure shows that, for both generations, the share of contribution dollars going to Democratic-affiliated recipients has increased over time, and that this shift started before the 2016 election. 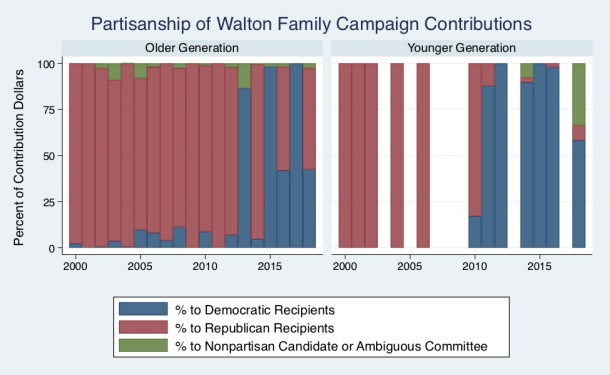 For the younger generation, the trend is even clearer. Lukas, James, and Carrie gave almost exclusively to Democrats starting in 2011. In fact, it seems that the younger generation was less politically-involved in the early 2000s and certainly not as committed to Republicans as their parents’ generation; the donations to Republicans during these years were a handful of gifts, usually totaling just a few thousand dollars. While this generation seems to have increased its involvement and has targeted it toward Democrats, it is worth noting that they still give far less than the older generation. The younger generation’s biggest spending year was in 2016, when they spent just over $400,000, far less than the almost $1 million spent by Rob, Jim, and Alice. Contrast this with the older generation’s biggest donation year (2004), when they contributed $3.7 million.

The younger generation’s 2018 gifts to non-partisan candidates and committees are telling of the family’s evolution. The biggest donation went to Marshall Tuck, a registered Democrat and previous president of the unionized Green Dot charter schools running for the non-partisan State Superintendent of Public Instruction of California. Their other major non-partisan contribution went to the With Honor Fund, a political action committee focused on electing veterans to office that “will work in a cross-partisan way to create a more effective and less polarized government.” While it is too early to tell where their support will go in the 2020 elections, the only presidential candidates that have received gifts from any Waltons so far have been Cory Booker and John Hickenlooper, both Democrats.

Altogether, it seems that the Waltons are shifting their political allegiances, or, at a minimum, there is a (shrinking) generational divide that is gradually changing the family’s political involvement as a whole. This could have important consequences for both political parties and may be reflective of a larger trend among wealthy campaign donors.

In fact, as they shift towards the Democratic Party, the Waltons are in good company among ultra-wealthy campaign contributors in the United States. According to research by Adam Bonica, Nolan McCarty, Keith T. Poole, and Howard Rosenthal, the share of federal campaign contributions from the 0.01 percent of wealthiest households grew to over 40 percent in 2012. In the 1980s, Republicans had the advantage in fundraising from the 0.01 percent, but the share of contributions from this slice of the income distribution to Democrats has been growing steadily. From the 1980s to the early 90s, organized labor and the wealthiest households were roughly equal in the share that each group contributed to Democrats, but by 2012, the 0.01 percent gave 4 times more than labor PACs to Democrats. Additionally, like the Waltons, there’s the sizable faction of school reform- and charter school-aligned donors in the Democratic Party. As Frederick M. Hess and Jay Greene demonstrate, the staff of education reform organizations funded by the Gates Foundation or the Walton Family Foundation overwhelmingly contribute to Democratic candidates for office.

The Waltons serve as a powerful reminder of some key features of donor behavior among major living philanthropists. First, philanthropic money is just one feature of their influence—many living donors are also major contributors to political campaigns. Second, the top 0.01 percent of households are a sizable and growing constituency in both major political parties. Third, philanthropic families can be multi-generational, and the shift from one generation to the next may signal changing ideological perspectives. Wealthy families like the Waltons are not immune to the generational divides in our political system. Given this, and given the unprecedented era of political tumult we are witnessing, political giving from the Walton family and other major wealthy families is poised to continue evolving.