New Works in the Field / Philanthropy and Education

Some insiders have highlighted differences. Carnegie Corporation President Vartan Gregorian explained, “Unlike traditional philanthropies, which make grants to a great many capable organizations with promising proposals, the new philanthropists work intensely with relatively few nonprofit organizations.” In this spirit of identifying potential differences (or similarities), I recently completed research that is more fully laid out in the upcoming volume The New Education Philanthropy: Politics, Policy, and Reform. In that chapter I ask if, and how, old and new foundations differ along two facets: 1) their priorities according to the types of issues/organizations they fund, and 2) their methods, as shown by the degree to which the different sets of philanthropies fund the same recipients.

K-12 grants from five old and five new foundations were collected from each foundation’s IRS Form 990 in 2000, 2005, and 2010. Information was then recorded about these grants, including the grant amount and the type of grantee (e.g. charter school organization, universities, association of elected officials, or arts education). 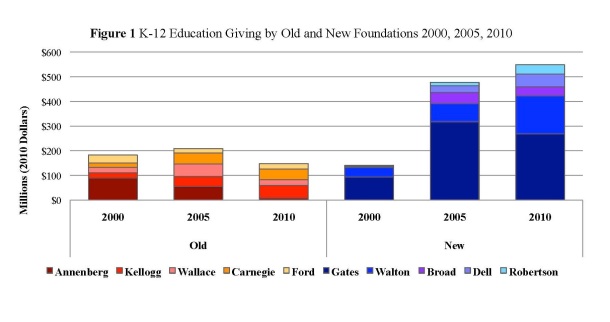 Figure 2 identifies the percent of old and new foundation funds going to different recipients in each year—old foundations are in red, new foundations are in blue, and each moves from darkest in 2000 to lightest in 2010. The left-most cluster shows that old foundations gave substantially more to university-based programs and research than did new foundations. The second grouping indicates that charter schools were a primary beneficiary of new foundations but not old foundations. Further, although old foundations grew their charter granting each year, new foundations increased their charter funding much more in each period. NewSchools Venture Fund (NSVF) typifies the “venture philanthropy” group comprised of grantees applying venture capital principles to education reform. NSVF, for example, provides seed money to organizations like charter schools, alternative teacher certification programs, education technology firms, and others operating outside traditional education institutions. Venture philanthropy funding also appears to be largely a feature of new foundation granting, and its rapid growth suggests an emergent area of differentiation between new and old philanthropies. Finally, the “staff recruitment/training” category is one where new and old foundations seemingly mirror each other. Patterns in growth are very similar, though new foundations did dedicate more funds to these areas in 2010. Qualitatively, however, differences exist. New foundations almost exclusively fund groups like Teach for America (TFA), which develop their own training in lieu of more traditional university-based programs. Old foundation grants split between alternative programs like TFA and those that utilize university-based preparation.

The main takeaway suggested by Figure 2, then, is one of differences. New foundations overwhelmingly prioritized those outside traditional education institutions. Meanwhile, old foundations did not share this laser-like focus, and instead continued supporting grantees more aligned with established systems.

Figure 3 shows old and new foundation grantee networks (click each network for a larger version). To construct these networks, I only considered grant recipients that 1) received at least $1 million total from either old or new foundations and 2) shared at least two funders with another grantee. Lines between organizations show they shared at least two funders, with larger nodes indicating recipients that received more grant dollars and bolder links meaning more shared funders. Networks constructed in this way illuminate shared priorities and show whether foundations will go a step further by supporting the same grantees in pursuit of these goals.

In 2000, no new foundation grantee network existed because not enough recipients met criteria for inclusion. A network did exist for old foundation grantees, split primarily into one cluster for teacher/administrator development grantees and another for organizations associated with the Annenberg Challenge.

By 2010, new foundations drastically altered the degree to which they converged grants into the same organizations. The tangled web indicates a great number of shared ties among grantees—many of those receiving new foundation funds attracted multiple new grantors. Consistent with Figure 2 above, grantees near the network’s core tended to be charter-schooling organizations, venture philanthropies, and groups providing alternative pathways into teaching or school leadership. Old foundations did not converge their grantmaking to the same degree. Although 2010’s old foundation grantee network includes more recipients, and in some points a denser web, it comes nowhere near the interconnectedness of the new foundation network. Further, although the grantees in 2010’s old foundation network had varied missions, they most often worked to transform existing education institutions rather than build new alternative organizations (as was a primary goal of new foundation grantees).

These differences help explain education research’s recent focus on new foundations. These foundations grant much more money with greater focus than old foundations, and they do so with a focus on nontraditional recipients. However, the fact that such pronounced differences exist may also serve as a call for greater investigation around old philanthropies, or, at the very least, more nuanced understanding of these differences.

Jeffrey W. Snyder is a Postdoctoral Research Fellow in Education, Philanthropy, and Advocacy at the University of Michigan and Michigan State University. He studies education policy and politics, especially the ways in which non-district actors (e.g. mayors, philanthropies) shape and respond to education reforms. Recent research on philanthropies in education can be found in Educational Researcher, and other recent work can be found in the American Journal of Education, Educational Policy, and the Journal of Public Administration Research and Management. He holds a PhD in Educational Policy from Michigan State University and a Master’s in Public Administration from Cornell University.